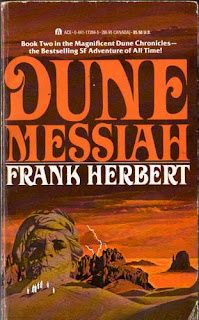 I didn't reread Dune this month because I've read it twice in recent years.

Instead, I listened to the book on cd of the second book, Dune Messiah. I have a crappy new job and almost zero time to read now :(

Anyhow the second book is like the first one, confusing. Herbert has created a very complicated universe that I never quite feel like he takes the time to explain. For example, he's imagined thousands of years of previous history, with previous jihads, and emperors but I couldn't tell you what went on.

Herbert like Melville, Dickens, or Hemingway writes literature where he spends lots of time describing the scene or some other detail. Where as someone like Clarke or Asimov give only the slightest time towards descriptions and just let the story drive the novel. This isn't necessarily a negative, I like authors to just get to the point, but I'm probably in the minority.

If the first story in about Paul's rise to power the second book is about his downfall. It's like the Godfather I and II. I the first movie the Corleones are on top of the world and in the second one they fall apart.

Paul as an adult is quite an impressive figure. He is a mentat. A human capable of computer like computations of probability and logic. He is a Bene Gesserit, which gives him any number of strange powers like the Voice. And he also has Prescience, the ability to see into the future.

Despite his powers a group of villains attempt to dethrone him. One of them is a space guild navigator and who also has prescience and thinks he is able to block Paul's powers.

They also use a Ghola of Duncan Idaho, who died in the first book. A ghola is kind of a reanimated zombie.

The theme of the book seems to be that even though Paul sees all the dangers that these villains are set to enact upon him, he is unable to prevent them because. A) he feels guilty about all the billions of deaths the jihad in his name caused and B) he sees that the results of all of these events will allow his child Leto II to be the next Emperor.

This makes sense but it makes for a pretty boring novel when the protagonist just stands around going "woe is me" for the entire book.

The other somewhat main character in the book is Alia, Paul's sister who is a Reverend Mother and though only a teenager has the memories of many adult woman including her own mother. So she remembers her father as her lover and her brother as her son. She is a fascinating character but for most of the book, she is struggling to figure out if she needs to help her brother or if he has everything well in hand, so she also does nothing for most of the novel.

The novel also hints at the idea of brother and sister producing an heir together, it seems at different times that the two are physically attracted to each other. However, this incest thankfully never occurs.

I wish that this book didn't take place almost entirely on Dune because I am very curious about the rest of the universe. Tleilaxu for instance produces such wonders as Mentats and Gholas, and Face Dancers, but what is the culture there like. Does a typical citizen look human? And that's just one planet of thousands.

I want to read the third book, but my library doesn't have the book on CD, so I may be out of luck for the near future.
Posted by Chimeradave at 2:29 PM