Thoughts on "Midnight at the Well of Souls" 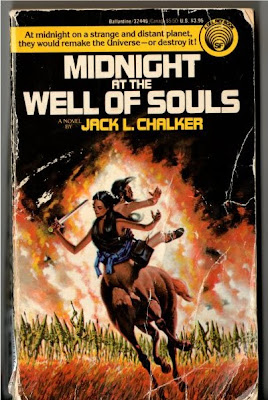 What Makes us Human?

“Midnight at the Well of Souls,” by Jack Chalker is a novel that explores the idea of what it means to be human. Is humanity in this shell we call a body, is it found only in our intellect, or is it a synthesis of the two?

The protagonist of the story is Nathan Brazil, a freighter captain who may have lived too long. When he was younger, humanity was made up of individuals, but most of humanity are now members of a Confederacy. These humans are bred in laboratories and are hermaphroditic or neutered. Most of these humans are cloned from the same couple of original models and all of them are “raised by the state to think as identically as they looked” (p. 6 in my paperback edition).

In my mind, that essential spark or drive that makes us humans has been bred out of these creatures. They are organic robots instead of free-thinking people with wants and desires. In an attempt to “improve” humanity, by covering-up the blemishes of rebellion and vanquishing the dreaded pox of evil, this society has thrown the baby out with the bathwater and leached away everything that made us human in their attempts at creating perfection.

The whole concept reminded me of the asexual clone-based-telepaths humanity has become at the end of Joe Haldeman’s “The Forever War.” Haldeman’s novel was clearly a reaction to the changes in American society regarding sexual norms that took place while he was a soldier in Vietnam. When he left it was Donna Reed and when he returned it was free love.

However, I don’t believe that Chalker’s point was as political or topical in nature. I think his goal was to look at these themes in a broad sense; to compare individualism or existentialism to being a part of a larger whole or a part of something greater than yourself. Nathan is surely the hero of the novel and he embodies a rugged individuality and yet his philosophy has not found him happiness, instead he thinks to himself over and over again that he is “alone and will always be alone.” It is only while he is a part of a grand adventure in the Well World where he has to work with and depend on others that he is able to truly be happy.

The Well World is a magical sort of world. It is broken up into 1560 hexagons. Each hexagon is 355 km tall and 615 km wide. Each of these hexes is a controlled environment with it’s own planets and animals and unique temperature and atmosphere norms. However, the borders are open, you can step from one hex into another and not notice, just make sure you’re able to breathe the air in the new hex. Oceans, mountains, deserts, and/or forests may stretch across multiple hexes or only one. But most importantly each hex houses a form of intelligent life. One hex holds beings called Dillians that resemble our mythical Centaurs, one holds plant/animal hybrids called Czillians, and another houses man-sized bat like humanoids called Creits.

The catch is that if you stumble into the Well World (there are various planets and points in space where this might happen) you will be forced to become one of these species at random. You will still have your human intellect and your memories, but you will be a beaver (Ambrezans), or a giant flower (Slelcronian), or maybe a sort of elephant with two trunks that walks on its hind legs (Slongorian). “Midnight” seems to suggest that you would still be the same person, but you would also be driven by the needs/desires of the body you ended up in. For example, does the body produce a desire to procreate every day, every month, or only a few times a year or does it reproduce asexually? Does the new body hibernate in the winter? Do you have a sudden urge to fly south during the winter, or swim upstream in order to hatch your eggs in fresh water?

I loved the world of this story and how we only get to see a fraction of the hexes and different races and cultures that inhabit them. My imagination ran wild thinking about what might live in these unseen hexes. Also I liked how no species was truly evil just for the sake of it, they just seemed to be evil due to their nature. For instance, the “savage” Murnies who seemed like senseless monsters the way they would rip a deer apart and eat it raw, but it turned out that they were rational beings with their own sense of honor and right and wrong. It was just not the same values we uphold.

I did a lot of mathematical calculations regarding the Well World itself. I previously did some calculations of Larry Niven’s “Ringworld” and was fascinated that I was much better able to visualize and understand the distances involved in that story after taking a closer look at it.

Later in the book we are told that the hexes that border the wall that separate the Northern from the Southern Hexes are “two hexes wide and half a hex tall” (p 287). Which may explain why my projected area doesn’t match with what we are told the area of the Well World is.

My edition of “Midnight” didn’t include a map but Ben from the Classic Science Fiction Message Board provided me with a copy. However, if his map is to scale the border hexes look like they are the same size as the other hexes just cut differently. I can extrapolate from that map, assuming the rest of Well World follows the same pattern as the pictured area, that there are 128 of these border Hexes, but I still can’t be sure of their shape because the map and the text in the novel contradict each other. 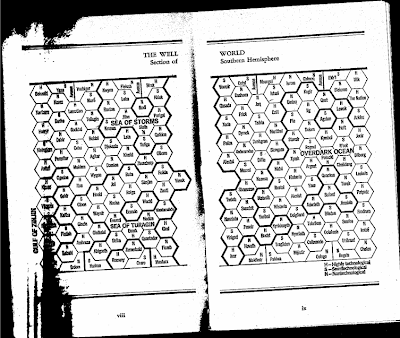 Posted by Chimeradave at 9:33 PM