Thoughts on "The Naked Sun" 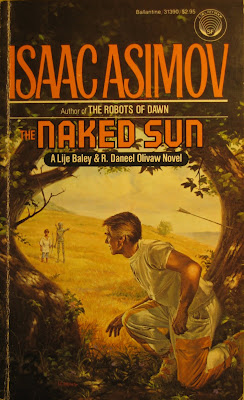 I was a bit disappointed that there was little interplay between Baley and Daneel. It's been about a year since I read the first book, but the way I remember it in "Caves of Steel" Baley was worried about Daneel solving the case before he could. Every clue Daneel recognized was suspenseful, here is a walking computer, limitless amounts of knowledge and all Baley has going for himself is human intuition.

Like others said this is basically a sociology book with a plot. First there are the Solarians who have made eschewing human contact a way of life. It was fascinating to read about the way they were raising children. The children wanted to play together when they were younger, but the Solarians slowly forced it out of them, isolating them more and more all their lives. The Solarian scientists purport that this need for contact would be slowly breed out of them. To any sensible Earthling this is of course complete hogwash, but it is fascinating to imagine a world where everyone has been given the same phobias. I liked that there was one woman, Gladia, that rejected the indoctrination. She still craved human contact even though they had tried to force it out of her during her childhood. It reminded me of the topsy turvy
realities explored in classic Twilight Zone episodes.

The other interesting bit of sociology was first introduced by the lone sociologist on Solaria. He says that theirs is the first civilization where humans are all on even terms and have nothing to do but enjoy themselves because robots replace the working class. The unexpected result of this is that the people of Solaria lose the human drive, since all of their needs are met they stagnant instead of striving and becoming stronger due to hardship.

I really like how despite spacer's best efforts to build safe machines even positronic-brained robots can unknowingly break their three laws. I did however come up with an easy solution to the problem presented in this book. If two robots are being given orders that seem benign on there own but are deadly when combined the solution is to have a central positronic-brain imbedded into the house that does nothing but monitor the house and watch all the robots for just such happenings and when it begins to see one it can shut robots down by remote control or alter their orders.

Even though I read the final Foundation book, I don't think the idea of a Spacer/Earther conflict every really sunk in, it's a shame Asimov never wrote a book devoted to the conflict. He just showed the effects in the final Foundation book. I'll need to go back and re-read that because I didn't know the significance of the worlds they were visiting in "Foundation and Earth" because I'd never read this book.

It strikes me that Asimov seemed to spend all of the 80s putting a button onto his classic works, linking them together, explaining things left unexplained. He always made sure they were good stories by themselves too though.
Posted by Chimeradave at 7:59 PM