Thoughts on "A Scanner Darkly" 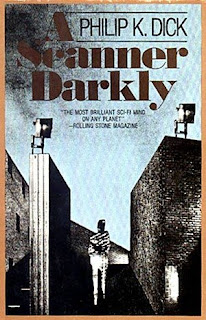 I listened to the audio book of "A Scanner Darkly" by Philip K. Dick and as always I wanted to share my thoughts.

First off, I have to tip my hat to Paul Giamatti who narrates the book masterfully. Each character has their own voice in his narration which enhances the experience and makes the whole thing seem more real. My favorite was the gravelly voice of Charles Freck.

The novel itself is not really much of a science fiction novel. Written in 1977, Dick set the story in a sort of dystopian 1994 where America's drug problem, at least in California's Orange County, is at a high level. There are a few new technologies:

Scramble suits- a special clothing that allows the wearer to remain completely anonymous since it masks, features, voice, and even the tone of voice of the wearer. Instead of seeing the the wearer any observer sees hundreds or thousands of different people flashing by faster than the eye can register. This is merely the plot device that allows Bob Arctor's (the protagonist) superiors to not know his identity.

Other than that it's just a straight-up novel about drug use, drug culture and the relationship between drug dealers and narcotics officers.

At one point in the novel Arctor tells a story about how narcotics officers end up dealing drugs as a cover and find out how lucrative it is. Suddenly they are making more money from drug dealing then being a narcotics officer and they begin phasing out their police duties and increasing their drug dealing. Where as on the same side of the coin drug dealers that turn informant start to narc on more and more people until they begin to phase out their drug dealing and end up becoming almost bonafide police officers.

My favorite part of the novel was the random tangents the characters would go into such as when Charles Freck attempts to commit suicide but ends up having a vision of hell in which a demon reads to him out loud every sin he's ever committed in chronological order.

The tangent that really stuck with me and got me thinking was when one of the characters imagined that time was a loop and that Judgement Day and the day of Jesus's crucifixion will turn out to both be the same day. This thought totally blew my mind! Someone needs to write a short story about this one.

At first I didn't really understand what Bob Arctor's attraction to Donna was all about. She never seemed very interesting as a character, except that Ernie Luckman told some increasingly unbelievable stories about her and some friends committing various crimes such as robbing a Coke truck and enjoying months worth of free soda. However, after giving it more and more thought I decided that to Arctor and probably Dick, Donna represents "The one that got away" Dick makes it a point of stating over and over again that Arctor never got the chance to "ball" Donna to use Arctor's own phrasiology. I know that in my own life, though I am recently happily married, there are one or two women from my past that I still think about every once in a while and think to myself I wonder what being with them would have been like. Where as, I don't think about my ex-girlfriends because I had that experience. For some reason it seems to be human nature for things left undone to linger in our mind and become all the more exciting in our imagination.

The other great character in the novel is Jim Barris. Giamatti reads his every line with a sort of stuck-up nasally voice. Barris is one of those guys that talks down to everyone and acts like they are an expert on everything. It is especially satisfying as the novel goes on to realize that Barris isn't nearly as smart as he would have everyone believe.

I haven't seen the 2006 movie adaptation though I want to. I purposefully didn't want to know who played what character in the movie until I had finished reading the book, otherwise I might have fallen into the trap of associating such and such an actor with such and such a character. Now that I have looked up who plays who, I'm not too excited about seeing Keenau Reeves as Bob Arctor, but Robert Downey Jr. will be an interesting choice for Jim Barris.


Edit: (February 12, 2011) About a year and nine months later, I finally saw the movie. Though it wasn’t nearly an equal experience to listening to the audiobook, I did really enjoy it. I mean while many of the scenes in the book were absolutely laugh out loud funny, to see these same scenes acted out are somehow less humorous. The ridiculousness of the characters and the situations that were hysterical in my mind’s eye somehow seemed tragic and pathetic when I saw and heard them.

I liked that for the most part the movie was very faithful to the novel. The one glaring exception is that at the end of the movie Donna turns out to be Bob Arctor’s handler Hank. I felt like this was done just to add another surprise to the ending.

I thought the use of rotoscoping (The actors filmed the movie and then animators painted over the film to make it look like a cartoon) really enhanced the movie visually. It made the idea of the scramble suit work better then CGI would have.

Posted by Chimeradave at 6:36 PM