Thoughts on "The Mote in God's Eye" 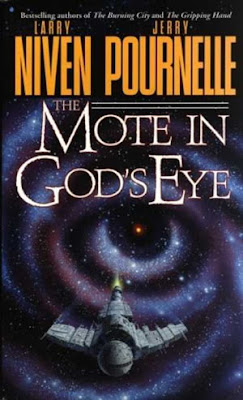 I just finished reading "The Mote in God's Eye" by Larry Niven and Jerry Pournelle. This is the third book I've read by this duo. Previously I read "Lucifer's Hammer," and "Footfall."

All three have been both riveting and thought provoking.

I'm going to focus this review on "Mote," but there will no doubt be mild spoilers for all three novels as I point out similarities and differences.

"Lucifer's Hammer" and "Footfall" both took place in the "present." The novels examined the respective questions of "What would happen if an asteroid hit Earth tomorrow?" and "What would happen if aliens invaded Earth tomorrow?" For me this made the novels very accessible. I understood the characters and their motivations because though they were in an extraordinary situation I shared the common ground of American culture and ideas with the characters.

"The Mote in God's Eye," on the other hand takes place in the future year 3017 during the Second Empire of Man. There is 1,000 years of history to learn in order to understand who the characters are and what motivates them.

While a lot of time has gone by humans are still human. The characters don't really act much different then you or I would. In fact, I found it quaint to think that in another 1,000 years civilization would be run by aristocracy. I don't know how realistic that is, but I just went with it.

I remember one of the great things about both "Lucifer's Hammer" and "Footfall" were the vast variety of characters such as: an astronomer, a biker, a senator, a tv producer, and science fiction writers. "Mote" on the other hand suffers from having lots of navy man characters of the square-jawed, box-body variety and there is only one prominent female character in the whole novel.

But that's where any small amount of criticism ends.

The novel follows the same rough format as the others. Events happen slow enough for characters to reflect and predict the results of an unknown event. For instance in "Lucifer's Hammer" when the asteroid is first observed many scientists think it is going to miss the earth, the reader of course knows better.

In both "Footfall" and "Mote" there is endless speculation as to what the aliens the humans are about to meet will be like.

This device is a lot of fun because the reader has the same amount of knowledge as the characters and you can speculate along with them and try and guess if they are missing something.

In "Mote" when the humans finally do meet the aliens, they are extremely alien. Their culture is mysterious and as one character says, "It seems like they are learning a lot more about us then we are learning about them." And when the humans do finally learn the Moties' big secrets you can't help but wonder how the scientist never asked those questions! And yet as a reader I didn't think of them, so how can I blame the characters?

The Motie aliens are fascinating creatures. They are much more benevolent then the warlike baby elephants in Footfall, they are also highly intelligent and crafty and perhaps more dangerous.

What do other folks who have read this book think?
Posted by Chimeradave at 8:35 PM