Thoughts on "the Man in the High Castle" 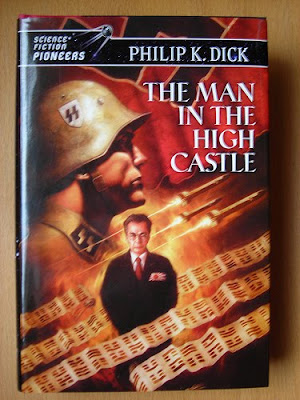 I'm sorry for contributing to the lull this past month. I read the first half of "The Man in the High Castle" early in the month, but like many of us I found it difficult and so I put it down and read comic books and watched television for most of the month. However, I did pick the book up again a few days ago and finished it.

I read all of the posts about the book and I am generally in agreement with others. I think Bill matched my own feeling about it when he wrote, "Enjoyed might be too strong a word."

I finished the book mainly because it won the Hugo and so I figured it must have a killer ending or something (More on the book's ending later). The only other Hugo nominee I've read from 1963 so far was "A Fall of Moondust" (which we read a few months ago) and I have to grudgingly admit that this is a better novel. It feels less dated and has better character development and story.

I agree with James who said that Dick doesn't write about heroic people, he writes about "little people" or everyday people. I thought this directly related to a quote from the novel, (my p 42) "Whom the gods notice they destroy. Be small… and you will escape the jealousy of the great."

This in a nutshell was the major reason why I didn't enjoy the book more. I kept comparing it to other alternate history books specifically Kornbluth's "Not this August" which is still fresh in my mind. In August the American people are conquered too. However, that novel is about hope, it is about how even if America is physically defeated you can't destroy the American spirit. Bill hit
upon this idea when he said that it made sense that, " a defeated people would be influenced by their conquerors. On the other hand, I would expect some of the population to be just the reverse, clinging proudly to their differences."

Another note on Dick's writing I read "A Scanner Darkly" a few months ago, and believe it or not that book was ten times more confusing than this one. Darkly was also more overtly drug induced.

I also agree with Tony who calling the I Ching outdated. I was equally mystified with the idea that the oracle wrote the book within the book. Surely all educated people understand that the I Ching, horoscopes, and fortune tellers all work the same way, the predictions are always vague enough for the client to fill in their own blanks.

Like Ann James, I didn't quite understand what happened to Tagomi in the park with the piece of jewelry. It seems that he somehow traveled to a different reality were the Japanese were not first class citizens. I think it was purposefully left vague, but I came up with all sorts of crazy ideas like the whole novel was a fantasy and Tagomi merely "woke up" or the two realities are closely related and people can wander from one to the other, that's how Abendsen wrote the novel he came from the other world. But my favorite interpretation is that is a metaphor. Dick is trying to tell us that just as easily as Tagomi can come into "our world" we can find ourselves in Tagomi's world or a world like it if we as a world make poor choices and don't learn from past mistakes.

Even the cover of the novel confuses me. I have the same picture that was on this site all month. Does anyone else understand how it relates to the novel?

I don't understand if Baynes/Rudolf Wegener was really Jewish. He seemed to be a heroic character, I loved the scene where he told the anti-Semite that he was Jewish but there was nothing he could do about it. However, the revelation of his true identity at the end of the novel left me confused.

In the passage right before Juliana kills Joe (my p 212) "Blade, she thought. I swallowed it; now it cuts my loins forever." I took this literally and I kept waiting for her to drop dead. But I guess it was just more craziness. I don't understand why these few pages are the only hint of her being mentally unbalanced.

I found Childan a particularly loathsome character, kind of a sniveling rat of a man or a used car salesman. He was so obsessed with Japanese culture I didn't even realize he was American at first. However, he was a sort of interesting character, I enjoyed hearing the machinations forming in his head and knowing that they were all going to go horribly wrong somehow. Also, my favorite of the plotlines was the idea that authentic American cultural artifacts had become so popular that someone had begun mass producing fakes.

Being an archivist this fascinated me, especially the argument that an original and a perfect fake have nothing that separates them, there is no specialness that emanates from a true original. I agree this is true and yet originals will always be worth more than copies.
Posted by Chimeradave at 8:43 PM