Thoughts on "Out of the Silent Planet"... 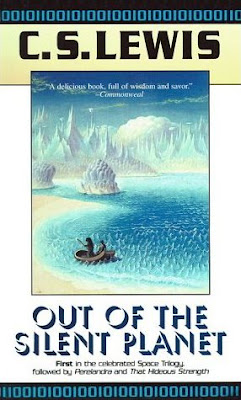 First posted July 9, 2010, edited on July 12, 2010 after further examination of the book due to comments and discussion of the review.

As I was reading “Out of the Silent Planet” by C.S. Lewis, I thought of “The Wizard of Oz.” (The movie, I’ve never actually read any of the books). As you no doubt recall, the movie starts in black and white and then when Dorothy gets to Oz, it turns into a Technicolor film. I thought this book was science fiction during the trip to Malacandra (Mars), but after getting there the story becomes fantasy.

Okay, the stuff on the spaceship was far from being "hard science fiction," but for 1938 when it was written, this was remarkable. I liked how the ship was a sort of sphere and the gravity was towards the ship’s core so all the rooms were curved. It reminded me of the rotating ship in 2001: A Space Odyssey (Again, I’m thinking of the movie version). I also liked how Weston, the creator of the spaceship (and the book’s villain) was always so concerned with conserving power and air during the trip. There are too many science fiction stories were space travel is just routine like driving your car down the road to the next neighborhood. It’s just a more interesting story when space travel is still something difficult.

Like I said, when Ransom arrives on Malacandra, it switches to a fantasy story instantly. They get off the ship and Mars has an atmosphere, breathable air, and forests. You just have to say to yourself, “Okay, it’s going to be one of those stories.” In order to enjoy the story, you have to check the science portion of your brain at the door.

The main plot of the story is that Ransom a Philologist, a sort of linguist, was kidnapped by two men about to make their second trip to Malacandra (Mars). They think that the “natives,” Sorns, a large thin almost birdlike race several feet taller than man, demand a human sacrifice. You see, because Weston and his toady sidekick Devine don’t understand the alien language well, they think the aliens are primitive savages. In reality, they are intelligent and peaceful creatures. Anyway, Ransom believes he is going to be sacrificed too, so the first chance he gets he runs away into the strange world he’s just arrived at.

To understand this book, you have to understand that C.S. Lewis was a devote Christian. So he writes “Christian stories.” In this story the Christian elements are somewhat masked, God is called the “Old One” Jesus is “Maleldil,” and angels are Edil. All of them are interdimensional beings that live outside of linear time as we know it. The Devil, called “the Bent One” is a rogue Edil that betrayed the “Old One” and caused him to cut off direct communication with Earth through Edil. Earth is known as “Thulcandra” which translates to “the Silent Planet”

Weston, who as I mentioned is the story’s villain, is a human who believes that humanity’s destiny is to populate other planets in the solar system and then conquer other star systems and then rinse and repeat forever. Having grown up on Star Trek and having always been taught the American idea of “Manifest Destiny” in school, I must confess that a part of me agrees with Weston. I mean, didn’t Stephen Hawkins recently warn us that humanity must spread to other worlds if it is to survive?

On the other hand, sometimes I think of humans as a sort of locust. Like them, we are one of the only animals that destroys its own habitat. How can we spread humanity to other planets before we figure out how to live in harmony with this one?

According to Malacandran philosophy, each peoples and each planet have a certain amount of time and that’s it. Mars is a planet that is slowly becoming inhospitable to life, but the population just shrugs and says that’s the way of things.

In Lewis’ mind Malacandra is a planet in perfect harmony. The three intelligent alien species lived in peace. Each species felt valuable, no one group ruled over another. Ransom does not understand how three so different intelligent species could all live as equals, but he comes to realize that humanity really missed out on not having true brother species and later decides that humans so often keep pets because, without even realizing it, they are searching for the brotherhood of an equal.

My favorite of the three species are the Pfifltrigg, who unfortunately only really make a cameo in the novel. Ransom never goes to their territory, so the only one we really meet is in the capital city. The Pfifltrigg are tinkers and builders. But, they make things just because they enjoy it. They just build, build, build and then they give it away, kind of like the Doozers in Fraggle Rock. (Why do I keep going back to movies and tv today?)

Malacandra is ruled by Oyarsa, who is an Edil. Lewis wants the reader to believe Oyarsa is a fair ruler, but the truth is he’s just as dark and evil a creature as Weston or the “Bent One.” Oyarsa tells a story that thousands of years ago he feared his people might decide to make skyships and flee Mars, because even then it was known Mars was a dying planet. So Oyarsa nipped the rebellion in the bud before it got started by killing almost everyone, “Some I cured, other I unbodied” he said. Oyarsa says his actions were justified because though the civilization on Malacandra is not sustainable they do not know “fear, murder and rebellion.” Oyarsa is an Edil, he is not all-knowing. He has obviously made a mistake and refuses to admit it. I think he has broken the Social Contract he has with his people in Malacandra and should be removed. Maybe there is some other nice young Edil that can take over. As I already mentioned I don’t think I could accept a ruler that said, “Yes, the planet is dying but you should just accept it.” I’d want to preserve my people, and my people’s collective knowledge.

Overall, I felt like the religious aspects of “Out of the Silent Planet” were somewhat in the background. The story meshes science with religion (God is an interdimensional super being that lives out of linear time as we understand it) so completely that the story stands on it’s own as a piece of speculative fiction without only becoming a pseudo religious text.

The second novel of the series “Perelandra” unfortunately never develops into anything more than a pseudo religious text, but that’s a story for another review.
Posted by Chimeradave at 9:49 PM