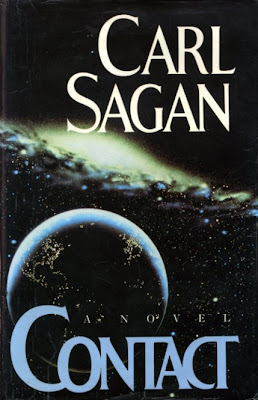 Carl Sagan's "Contact" is a great concept and is very well written in some parts, I especially enjoyed the beginning where the reader follows Ellie Arroway through her childhood.

However, the novel suffers from being kind of flat. It's a 432 page novel (all page numbers are according to the hardcover edition I got from the library) and I got the feeling someone told Sagan that's how long a "real" novel had to be. There seems to be some filler in the form of tangents where Sagan introduces all sorts of extra science fiction elements into his near future world.

But I'll focus on those tangents later, but first I want to explain why I thought the story was flat. On about p 106 Arroway and the other scientists discover the 10,000 page encrypted message from the Vegans (Did anyone else read the first mention of Vegans as talking about those vegetarians that don't eat dairy?) but they can't decipher the message. So, they wait for the message to repeat, hoping that at the beginning of the message is a "primer," a key to the encryption. Then around p 234 they figure out that there is no primer, but they end up figuring the message out without one. It's only about 100 pages, but it felt like a lot more while I was reading the book. This section was kind of bland, nothing was happening, it just felt like the story had no momentum.

I didn't like the religious aspects of the book until the end of the novel. When the evangelist characters Joss and Rankin were introduced I felt like they were just "strawman" characters, whose only purpose was to be beaten by Arroway and science. When Arroway debated them, I thought that the two of them were made to look like jokes. I'm no preacher, but I felt like I could have put up a better argument against Arroway.

I think that religion comes down to faith. God, in the Christian sense, doesn't show himself in an absolute fashion because he wants us to choose to follow him. He wants us to choose to be "good people" not out of fear, but because of a belief that it's just the right way to live. Because philosophies like "love your neighbor as yourself" and "turn the other cheek" are worthy philosophies to aspire to.

I was happy to see that the ending dovetailed: Arroway who questioned religion because of a lack of absolute proof, received first hand proof of aliens and many other wonders in her journey across the galaxy, but she only had her words to share with others. She had become exactly what she criticized. She expected the rest of the world to believe her story and her philosophy without any physical evidence.

The very end of the novel puts a further spin on the ending when a computer finds a message buried deep inside the exponents of Pi, a binary code that translates to a circle. The novel purports that this is the proof Arroway needed for people to believe her story. I'm more skeptical of human nature and figure that the average person would either figure it was a coincidence, or not be able to wrap their head around how deep the number was buried in Pi and just figure it's not true.

I just thought I should note that in 2009 Pi was calculated to 2.5 trillion digits and no sequence of ones and zeroes or binary circles were found, but it was a fun idea, wasn't it?

Okay, I promised I'd get back to those tangents. The first one, around page 223 is all about a theme park called "Babylon" that is somewhere 30 minutes from Manhattan by train, but still subject to NYC laws, so it must be in Brooklyn, Queens or the Bronx.

By day Babylon had neat architecture, fun rides, games and tasty food, but by night Babylon was an adult theme part where men and woman could play out sexual fantasies with prostitutes.

I know there is a real market for prostitution, but I find it impossible to believe that it could ever be coupled with a family friendly tourism industry. Sure Las Vegas is a tourist trap, but I've never seen it advertised as a family-get-away destination.

The other tangent is when Arroway goes up to a space station and there are a small number of elite super rich men who believe that living in the weightlessness of space is going to prolong their lives. Everything I've read about the effects of weightlessness suggest that it's long term effects are harmful. Here is what Wiki said:

The most significant adverse effects of long-term weightlessness are muscle atrophy and deterioration of the skeleton, or spaceflight osteopenia. These effects can be minimized through a regimen of exercise. Astronauts subject to long periods of weightlessness wear pants with elastic bands attached between waistband and cuffs to compress the leg bones and reduce osteopenia. Other significant effects include fluid redistribution (causing the "moon-face" appearance typical of pictures of astronauts in weightlessness), a slowing of the cardiovascular system, decreased production of red blood cells, balance disorders, and a weakening of the immune system. Lesser symptoms include loss of body mass, nasal congestion, sleep disturbance, excess flatulence, and puffiness of the face. These effects begin to reverse quickly upon return to the Earth.

I especially enjoyed the part about increased flatulence. I just picture the men and woman on the International Space Station in a sort of reenactment of the famous beans scene in Blazing Saddles.

Finally, I wanted to mention my confusion about one passage in the novel. On page 277, Arroway is agonizing over Drumlin's death. She feels guilty because her first thoughts when he died were about herself. She thinks about men who for one reason or another she had admired "Drumlin. Valerian. Derr Heer. Hadden...Joss. Jesse... Staughton?...Her father."

Was the purpose of this passage just to foreshadow the revelation at the end of the book that Staughton was her biological father. When I read the passage the first time I was sure it had some sort of deeper significance. Like she was admitting to herself in some sort of Freudian way that she was sexually attracted to men she admired.

The other strange thing about the passage is that she doesn't mention Vaygay. Of the men in her life, he was my favorite. Clearly he was interested in her sexually, but he never pressured her. He just sort of left that option open to her. And in turn she developed a sort of relationship with him that went somewhere beyond friendship but only unconsciously on her part. Look at the way Arroway gets all "hot and bothered" when she thinks of the other women in his life.

I haven't yet seen the 1997 film. (It's next in my netflix cue). But I am looking forward to seeing how it differs from the novel. I see that Matthew McConaughey plays Joss and so I suspect Arroway and him will become romantically involved in the movie version. Off hand this doesn't make sense to me, though the end of the novel seems to imply that the two characters could get together after the events of the novel, because Arroway's experiences have given them new-found common ground.
Posted by Chimeradave at 7:49 PM