Thought on "Oath of Fealty" 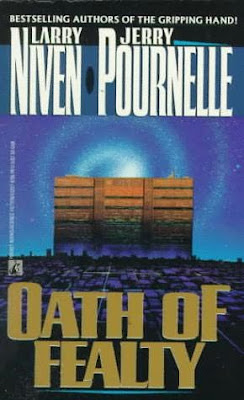 "Oath of Fealty" is a good science fiction novel that falls short of being a great science fiction novel. "Fealty is the fourth novel I've read by the team of Larry Niven and Jerry Pournelle. The others being "Lucifer's Hammer," "Footfall," and "Mote in God's Eye." Each of those 3 were undeniably brilliant. They were real page-turners that explored fascinating new worlds and new ideas. They had exciting characters and situations. This novel, written in-between "Lucifer" and "Footfall" just doesn't measure up.

The world of the story is: in the near future, about 20 years ago, just outside of Los Angeles a huge arcology called Todos Santos has been built. If you don't know what an arcology is don't feel bad. I had to read the description is Wikipedia too. Here is a link: http://en.wikipedia.org/wiki/Arcology

This behemoth structure comfortably houses half a million people. Most of the residents never leave the structure which has everything from parks, to shops to restaurants, hospitals and funeral homes. But many of the people of Los Angeles resent this new city, they resent it's tax exemptions, they resent it's residents living in comfort while they're still poor. Many environmental groups are also against such structures because they believe they use too many natural resources to sustain them. One such group, the FROMATES has resorted to terrorist acts against arcologies in the past.

The characters in the novel are one of the weak points, there's no real protagonist which is okay if enough of the characters are fleshed out so that it feels like there are multiple protagonists. This was done effectively in "Footfall and "Lucifer's Hammer." In this novel you have a bunch of possibly interesting characters that you are never really given the chance to get to know. All you get is a glimpse. Maybe it was the length of the story that was the problem. The other Niven/Pournelle novels I've read were around 500 pages, this ones only 324.

You're rolling along reading about this world and exploring the arcology for about 70 pages and just when you're starting to wonder when it's going to get good, Boom! the plot hits. There are terrorists inside Todos Santos. They're about the reach the hydrogen tanks. They could destroy the city. We see how tense the mood in the Todos situation room is. Preston Sanders, the second-in-command is forced to decide in his boss' place. He orders deadly gas vented into the chamber where the terrorists are. However, it turns out the so called terrorists were teens with sophisticated electrical equipment, but a box full of sand not explosives. And so Sanders is arrested and prosecuted by the Los Angeles DA because there is a question as to whether Sanders acted too rashly.

This situation was interesting because I felt like the social norms regarding terrorism have changed since this novel was written in 1981. What was clearly an ambiguous moral situation back then would be cut and dry today. Due to the rise in terrorist attacks and school shootings (since the 1999 Columbine Attack), we (America) just don't mess around anymore. I can't see anyone in Los Angeles defending the teens actions. The thinking would be, "if you act like a terrorist expect to be treated as one."

There is an omnipresent security force in Todos Santos. However there is no reason to be afraid of them because there are bizarrely no courts or jails in Todos, that being one of the main points of the story that they are still under Los Angeles legal jurisdictions. This didn't really make any sense
to me.

Rather than being afraid of this ever present security force in some sort of "1984" like way, the citizens of Todos think of security as their friends. The citizen's thinking is summed up nicely in the memorable sequence of the toilet paper rope. The kids in Todos sometimes string toilet paper rope over Todos' high speed moving platforms. Only tourists duck, Todos citizens believe if it was anything that could hurt them security would stop it. The citizen believe that since security is always watching they are protected. However we learn in one of the first chapters that security watches the citizens randomly so many incidents are likely to go unnoticed, so anyone depending on security to protect them should eventually be hurt or killed.

I don't think this feeling of complete safeness is healthy at all. What about when they leave Todos, they are likely to forget they aren't in Todos and get hurt or killed by a mugger or something. And as I mentioned before even in Todos they aren't really safe, they just feel safe.

One of the more enigmatic characters in the novel is Thomas Lunan, a TV news reporter that focuses on the big picture story of what life is like in Todos Santos and what kind of a culture has developed in this new society. Rather than the obvious story most reporters are focused on, the terrorism story.

At one point Lunan makes a documentary about Todos Santos and talks about how safe Todos is compared to Los Angeles. He contrasts light- hearted scenes of Todos security watching over it's citizens, walking a drunk man home, helping a teen locate her father; with a scene of Lunan's own neighborhood in Los Angeles. Lunan parks his expensive car in a seemingly falling apart garage and walks several blocks to his apartment where all of his nice possessions are similarly camouflaged in a seemingly run down building. However, it doesn't seem to dawn on Lunan that he just put a video on TV which explains exactly how to rob him! One of the other characters notices this while watching the documentary and quips "he better be moving tomorrow." But sadly, you find out later that the night the documentary aired Lunan was in his apartment entertaining a lady friend. He's really lucky he didn't get them both killed.

Later on, Lunan participates in a jail break organized by the Todos top-brass even though he knows he can never do a story on it or even ever talk about it. Why would he do that? I could buy that the Todos story changed him, but at the end of the novel Lunan makes it clear that he is still a newsman and wouldn't want to live in Todos.

The novel features a second terrorist attack on Todos, which though this time the terrorists are clearly a threat, it never gripped me the way the first attack did because it felt like just more of the same. I think the second attack should have been something different instead of another scene of terrorists crawling through some sort of maintenance shaft towards hydrogen tanks again. Why didn't the terrorists strike unexpectedly in the city's mall or a crowded restaurant?

It seemed as if all the plot threads were wrapped up about 20 pages before the end of the novel and I actually put the book down for an evening thinking,"20 pages of epilogue, boring." but it turns out the book redeems itself, Niven and Pournelle still had a curveball, the last 20 pages were quite good.

Basically, for the whole novel the leaders of Todos are forced to decide whether they are going to become exactly what Los Angeles, Thomas Lunan, and the FROMATES accuse them of being, a nation state, a castle, a new independent civilization. And in the end Todos decides to stay a part of the larger world, it's an optimistic ending, but it works.
Posted by Chimeradave at 12:37 PM