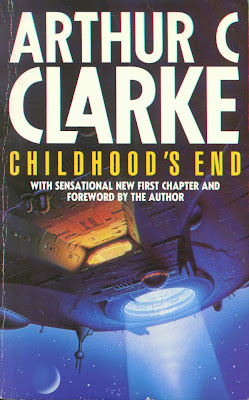 Childhood’s End by Arthur C. Clarke was really kind of uneven, it felt a lot like three separate novellas. The first novella is the most exciting and the best of the bunch. If you are strapped for time, just read this part and stop when the Overlord aliens reveal what they look like.

Just so we are on the same page, in my opinion, the first novella consists of: the Overlords coming to earth, taking over, meeting resistance and the story of one man’s attempt to find out what they look like.

The second novella kind of flounders around story wise for a bit, but ultimately is about a man that manages to stowaway on one of the Overlord’s ships.

And the third novella is about a group of humans building a community to try and get back the culture that seems to have been lost since the Overlord’s arrival, more on how that goes later.

And then there is a three-chapter epilogue that is a sort of summing up.

First, my opinions about the story: I was really into the first part of the book. The image of huge alien space ships just hovering over Earth’s cities is etched in my mind from the movie Independence Day and the miniseries V, but this was the story that inspired all of those. In this story the aliens don’t come off their ships. What do they look like? What do they have to hide? I was riveted. I expected their secret to be “the secret” of the novel. When you learn that they look like “devils” at the close of what I consider the first novella, I was disappointed. “What’s the point of reading the rest of this,” I thought?

At first, the second story goes nowhere. We are introduced to all new characters, there is this party, some people have a séance and someone asks the spirit realm what star the aliens come from. Then the novel gets back on track as Jan who has always wanted to go into space decides he is going to stowaway on one of the Overlord’s ships and go to the Overlord’s home world and enlists the help of scientists working in a base along the bottom of the ocean to hide him in a whale.

The third story is about a small group of people’s reaction to the fact that human culture seems to have stopped advancing since the aliens came. Scientists are no longer motivated since the Overlords have technologies far superior to Earth’s. Of course I’d think there’d be an equal chance that Earth’s scientists would be highly motivated to explore all kinds of new ideas in an attempt to catch up, but that’s not how Clarke wrote it.

In fact, every creative art in humanity seemed to have dropped off since the Overlords appeared, so one group of people decided to isolate themselves from the Overlords to stop the “domestication” effect, as they called it.

Ultimately, this plan turned out to be meaningless because something begins to happen to Earth’s children. They started to develop strange mental powers. The Overlords reveal that this has been their mission all along to guide humanity to this point, you see there is another alien the Overmind that harvests species into it’s collective and it had chosen Earthlings. The children continued to change and grow more powerful and more for lack of a better word alien.

Meanwhile the old-style humans never get over losing their children and all off themselves. This part didn’t sit well with me, I mean sure I’d be sad if every kid in the world was absorbed into an Overmind, but I don’t plan on ever having kids so I’d just go on with my life. I also wonder if the old-style humans could have begun to repopulate the world or if all babies would have been absorbed into the collective.

Meanwhile Jan is on the alien’s home planet, which is really cool to read about a city built for creatures that can fly. This one chapter was a highlight of the novel. Jan is sent home, but because of how long space travel takes 80 years have passed on Earth since Jan left and no other old-style humans are still alive. Jan decides to stay on Earth even though the Overlords tell him it’s not safe because the new style humans are about to join the collective, but Jan stays and when the new style humans finally join the collective they destroy the earth in the process.

It did fascinate me, the idea that demons were in our mythology not because of an encounter in the past, but because of a psychic echo from the future about the end of our civilization.

The ending of the book left me cold. The Overlords keep telling humans that being accepted into the Overmind collective is a great honor, but it seems to me that what happened was the annihilation of an entire planet. The Overlords are all very sad that the Overmind has never chosen them to evolve to the next being. Meanwhile, I’d be pleased as punch that my civilization got to keep it’s autonomy and individuality.

This novel was written in 1953 and as such there is a lot of weird science and weird history in it as well as strange cultural stuff.

The novel starts in 1975, Russia and the USA are still locked in the space race, both sides are weeks away from launching atomic rockets “into the stars.” Miscalculations like this I can forgive. How was Clarke supposed to guess man would make it to the Moon by 1969? In 1953 he was still 8 years from Yuri Gagarin whistling in orbit and Kennedy’s great Moon promise.

Things that I can’t forgive: a character using a uranium paperweight! Clarke didn’t know about radioactivity?

Another assumption that Clarke makes is that the “Puritan aberration” of sexual mores” (p 73 in my copy) will be eliminated by two inventions a completely reliable oral contraceptive and an infallible method of identifying the father of any child through blood testing. We of course have both of these technologies. “The Pill” came out in the 60s and it about 99% effective if properly used. I’d call that reliable. And DNA testing first reported in 1985 can offer definitive paternal proof.

So did these two discoveries change sexual mores, absolutely without the pill there would have been no free love movement in the 60s and DNA testing in paternity cases can be really important. On a lighter note, I’ve heard that on “the Montel Show” “you are not the father” is practically his catchphrase. However, have these discovers lead to an end to the “Puritan aberration?” Not so far. Not as long as the bible belt pushes abstinence only programs, television networks get sued for showing a nipple on television for 3 seconds, and every day it seems like from the way people talk about abortion, it was outlawed instead of legally protected in the Roe vs. Wade judgment. So in my opinion, the sexual mores of today may be different than those of the 50s, but we still have a long way to go.

The Overlord aliens pick the following 8 cites to park their ships over: New York, London, Paris, Moscow,Rome, Tokyo, Cape Town, and Canberra. I was in complete agreement except for the last two.

Cape Town, okay, it’s a well-known city in South Africa and I’m sure Clarke was attempting to be multi-cultural, and have a city in Africa, but today anyway Johanasburg is the bigger city in South Africa and he could have gone with someplace like Cario which was actually 25 population wise according to the above graph. Another better choice, Buenos Aries, number eight on the 1950 National Council graph and that would have brought in South America. By 2000 San Paulo is the 4th largest city in the world according to this graph.

Canberra is an even more bizarre choice. Okay, it’s Australia’s capital, but it’s only their third largest city today. Were Sydney and Melbourne smaller back in the 1950’s?

The strange cultural stuff includes: Stormgren the Secretary General of the UN recalls that the South African racial strife got so bad that the Overlords interceded and blocked the Sun over South Africa for 30 minutes. After which he says, “civil rights were restored to the white minority” Was this a statement against Apartheid, which started in 1948? Or did Clarke figure that whatever race had the highest population in any nation would end up oppressing the minority?

Duval a scientist accuses Stormgren of being a member of the “excitable, highly strung Nordic race.” (p 58 in my copy) Did Clarke just make up a stereotype? Like if I said British people are all left-handed.

I did enjoy the plot device of narcosamine, (p132 in my copy) found during research into animal hibernation. It slows down a creature’s metabolism so much that it can be misconstrued as suspended animation. I love how he just throws this in there like it’s a completely real discovery. I wonder how many readers believed this really existed?

Links
Original Post at the Classic Science Fiction Message Board
And All the Stars a Stage; Childhood's End, passage Compare and Contrast
Posted by Chimeradave at 6:43 PM