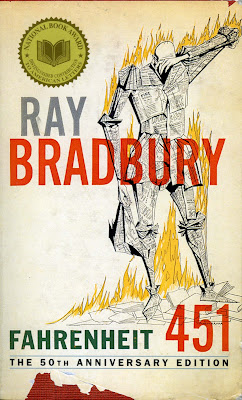 “Fahrenheit 451” by Ray Bradbury (1953) is considered a classic science fiction novel. It’s the story of a mixed up world where a fireman is someone who burns books and the houses where they are hidden, because books are evil.

Fahrenheit is usually considered to be a novel about censorship gone wild and that certainly is a part of it, but it is also clearly about the pitfalls of increasing government control as well as a very dark prediction about the future of television.

In fact, it was eerie to me how accurately Bradbury predicted the rise of reality television. Bradbury describes a population that is addicted to watching “the Family,” it’s a kind of a 3-D soap opera. We don’t have “the Family,” but we do have a population that seems to hunger for Reality TV. Especially creepy was the scene where Guy Montag is running from the hound and every house he passes he sees in the window that the people are watching the chase on TV. Then he hears an announcer tell everyone to look out their front door and Montag imagines millions of people all opening their front doors.

Many of the characters in the novel are memorable. Montag’s wife, Mildred is such an instantly unlikable character, there is just nothing ever redeeming about her. Captain Beatty, who always sounds so well read. You can’t help but imagine that he must have a secret stash of books himself somewhere. And Clarisse, the girl that Montag befriends at the beginning of the novel. She shows so much intelligence and free-thinking, her household was clearly one in which they read in secret. I kept thinking the novel would reintroduce her and/or her family.

In general, I liked Bradury’s writing, but at times, in the novel, the prose would get so descriptive that I’d lose track of what was actually happening. However, in other parts of the novel the increasing description was masterfully handled, such as when Montag is being chased by the hound, the text begins to blur and confuse until we aren’t quite sure what’s actually happening vs. what Montag is imagining.

I read the 50th Anniversary edition which has an Afterword (1982) and Coda (1979) (both by Bradbury). It wasn't until I read these that I realized that Fahrenheit was Bradbury’s first novel. These two short pieces made me wish that Fahrenheit had been written later in Bardbury’s career, the Coda especially is by an author at the height of his confidence and creativity. Here is a large sample, Bradbury was talking about how people send him letters and ask him to make rewrites to his novels and update them and then he mentioned how a school reader anthology tried to edit one of his short stories:

Some five years back, the editors of yet another anthology for school readers put together a volume with some 400 (count ‘em) short stories in it. How do you cram 400 short stories by Twain, Irving, Poe, Maupassant and Bierce into one book?

Simplicity itself. Skin, debone, demarrow, scarify, melt, render down and destroy. Every adjective that counted, every verb that moved, every metaphor that weighed more than a mosquito-out! Every simile that would have made a sub-moron’s mouth twitch-gone! Any aside that explained the two-bit philosophy of a first-rate writer-lost!

Every story, slenderized, starved, bluepenciled, leeched and bled white, resembled every other story. Twain read like Poe read like Shakespeare read like Dostoevsky read like-in the finale- Edgar Guest. Every word of more than three syllables had been razored. Every image that demanded so much as one instant’s attention-shot dead.

Do you begin to get the damned and incredible picture?
How did I react to all of the above?
By “firing” the whole lot.
By sending rejection slips to each and every one.
By ticketing the assembly of idiots to the far reaches of hell.
The point is obvious. There is more than one way to burn a book. And the world is full of people running about with lit matches.
Reading these two add-ons made me very interested to read the stage play adaptation of “Fahrenheit” that Bradbury wrote, if it’s as good as this Coda…then it would be well worth reading. And apparently a lot of things in the novel are expanded upon, especially Captain Beatty’s part.

Afterthoughts
Bradbury thought 451 degrees Fahrenheit was the temperature at which paper combusts. It is actually 842° Fahrenheit or 450° Celsius. I bet Bradbury gets letters all the time that say he should rename the novel “Celsius 450” or “Fahrenheit 842.” How absurd can you get? By that logic it could also be called, “Kelvin 724.”

One of the reasons why Fahrenheit is so well know is that it has been on the book list of many American schools for decades. On the flip side, I’ve heard sometimes that Fahrenheit is banned by some American schools. This may be true, but only in isolated cases, according to the sources I found it is not one of the commonly banned classics.
Posted by Chimeradave at 9:44 PM