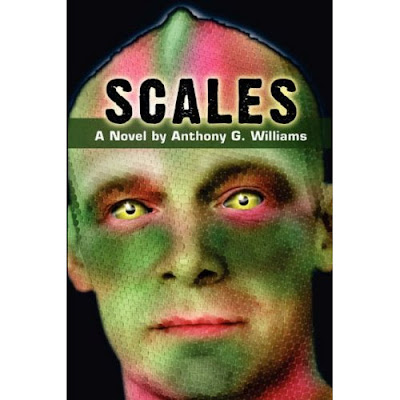 I don’t usually mind being a spoiler in my reviews because my logic is that you can only really have a sensible conversation about a book if both people involved have actually read the thing or if, at the very least, the relevant concepts have been fully explained. Also, I figure since most of my readers are Science Fiction fans and/or book club members, chances are they’ve already read the book.

However, with this review of “Scales” by Anthony Williams, I’m a little concerned about spoilers for two reasons:
1) The twists and turns in this novel are really good and unexpected.
2) Most people may not have read this novel.

So, in deference to everyone that hasn’t yet read this novel, this review will be in 2 parts. Part 1 will be spoiler free and discuss the novel in a general way and part 2 will be more in depth and should only be read by those who have already read the book.

Why haven’t you read this book?

Most likely you haven’t read this book because you didn’t know it existed. The novel was published through Authors Online LTD a British company formed in 1997 which publishes novels online and can also now print novels on demand. You can get Scales online for free here (in Adobe or MS Reader format).

Before I say anymore, I have to be honest here, I know the author of this novel through cyberspace. Tony and I have both been active posters at Yahoo’s Classic Science Fiction Message Board for many years. So, I will admit that I might have some bias. But those who know me and/or those who have read some of my reviews, know that I’m not one that minces words or lets authors off easy.

So you know I am being completely honest when I say that “Scales” is such a great Science Fiction novel it deserved a Hugo Award nomination.

I’m sure those who haven’t read the book are sort of checking out mentally or thinking to themselves, “this guy is a really good friend.” But those who have read the novel understand why it is worthy of such high praise.

The novel is about a man named Matt Johnson aka Cade. He is a journalist and a man who believes in science not faith. There is a mysterious explosion in his house and he is badly hurt. He should be dead, but instead he rapidly begins to heal and his skin begins to come away and instead of human skin he has a sort of lizard skin underneath. Also, he slowly begins to discover that this new skin and his quick healing are not the only powers that he suddenly possesses.

One of the things I enjoyed about the novel was the way it kept sort of switching genres. In other words, one of the first things Cade does when he starts to discover his powers is heal people, so I thought this was going to be a novel about a man of science that becomes a faith healer and sort of explore how he reconciles this. But then the focus shifts when Cade starts to help British intelligence catch terrorists and so I thought it was going to be a sort of a James Bond-adventure-Sci-fi. But then, the novel switches focus again when Cade starts to get into Earth politics and I thought the novel was about Earth getting it’s environmental and political house in order. But then the book veers again when the element of parallel worlds and the Saurians are introduced.

But the words “shift” and “veer” aren’t really good terms because the book does not ever lose its focus; it just goes in unexpected directions. Everything that happens ends up being important to the overall story. The book is about: science and religion; action/adventure; politics; and environmental issues. All the different subject matter just makes it seem more realistic.

I really liked this novel’s ideas about parallel world theory. The Saurians postulate that there are 4 different classes of parallel worlds that exist. These 4 classes revolve around kinds of turning points in time.

The first point of deviation Stage 1) concerns points where life began to develop on Earth.

“When the most infinitesimal variation in the behaviour of the elementary particles could produce major long-term differences. Among other things these could affect the formation of stars and planets, and the likelihood of life developing on a planet.” (p. 92)

Stage 2) Concerns points in time where one set of species types begins to flourish over another and when consciousness and intelligence are introduced. It is during this point that the Saurian world and ours deviated. “There was a natural disaster about a hundred million years ago. It was an asteroid strike- which in your world narrowly missed Earth.” (p. 166). I had guessed that the difference would be the asteroid strike that scientists theorized killed off the dinosaurs on our world. But I like this answer better.

It is an absolutely chilling scene when Cade goes to a Saurian zoo and sees a late stage hominin, a proto-human. Humans only got as far as homo erectus on the Saurian world, before Saurians became a dominate species.

Stage 3) In a broad sense are times when an intelligent species reaches a point of balance or goes down a path towards destruction. The Saurians knew that our Earth was in Stage 3 because they had seen parallel Earths that were more advanced than us revert to savagery after the civilization collapsed. The Saurians on the other hand through technology that brought them peace and returned their ecological balance found a civilization that was sustainable in the long term. They had found the balance.

Stage 4) Was an almost theoretical stage until Cade found he could see and visit these dimensions. This stage involves smaller differences. The Saurians theorized that there was a binding force that despite the differences in these worlds somehow brought them back towards being exactly the same as their close neighbor dimensions until possibly the two dimensions became one again.

At the end of the book when Cade discovers he has the ability to travel to different Stage 4) worlds and he goes to a world where the explosion at his apartment that gave him all the powers didn’t happen. He knocks on his own door and the novel ends. At first I was off-putted by the ending because I really liked the idea that there were only a handful of alternate worlds and it made me uncomfortable that Cade found a world that was so similar to his own. It made me feel like Williams had contradicted my favorite part of his own parallel world theory. Cade imagines that every parallel world he visits is going to splinter into 2 universes a) the universe Cade visited and b) the universe Cade didn’t visit. But I think that maybe in reality, Cade is acting as one of the binding forces that the Saurians had theorized existed. All of the universes Cade visits will be homogenized into a collective consciousness via mind-linking and journeying between dimensions and maybe they don’t actually split like he guessed, but move closer together until they actually combine.

The Saurians are such an interesting species; I think Williams wants us to see them as an ideal. They have reached a balance with nature where they are no longer polluting. There population is not growing to be larger than they can handle. No one is poor, no one is starving and there are no wars. And the recent scientific leaps in crossing into parallel worlds prove that they are not stagnating intellectually. However, they do seem to have lost some of their original drive, some of their survival instincts. Generations of peace have made them to soft and trusting. When the Saurians bring the ambassador from the more warlike Saurian dimension over to their world, Cade is the only one that can anticipate the Ambassador’s actions. Cade asks what they would do if the Ambassador got a weapon and held someone hostage and they have no idea how to defend themselves. And yet the Saurians tell Cade that they survived over a predator species that was, “almost as intelligent, but bigger, faster and fiercer.” (p 167) They survived because of their cunning and that they hunted the predator to extinction. Some might say that the Saurians have evolved past violence, but I’d argue they’ve lost an essential survival skill.

The last point I’ll go into is the effect mind-linking has on human culture when it was introduced in the novel and what the long term effects might be. Mind-linking ability is given to human civilization in the novel in the form of a rapid virus. People can suddenly hear other people’s thoughts and, at least at first, no one was able to hide anything from one another. Extramarital affairs were instantly revealed, politicians were seen to be lairs and I’m guessing used car salesman all committed suicide. Meanwhile, the Saurians developed mind-linking slowly and have many social rules concerned with it, so they really only mind link fully with close friends or family and they can mask some layers of their thoughts. Some humans quickly began to develop these masks, but the social norms would of course be slower to develop. The novel theorizes that wars would be almost impossible because enemies would be able to empathize with each other. Cade and his brother Luke were able to become closer and better understand each other through mind-linking, but they still disagreed. Luke was still a faithful Christian and Cade was not. So I believe the potential for conflict still exists. But I can’t argue that it would be a kinder and gentler world if we could all really understand our similarities as well as our differences.
Posted by Chimeradave at 8:18 PM