Thoughts on "The Door into Summer" 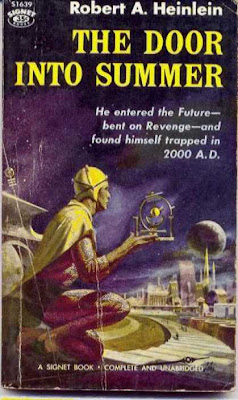 When I finished "The Door into Summer" and found it had a
time-travel-into-the-past-twist and a May-Dec Romance twist at the end, I couldn't help but think of the Heinlein book we read last year "Farnham's Freehold," which also had these same plot points. Maybe some of you are still trying to forget that one. As I recall, it left a bad taste in some member's mouths.

I went back and looked at some of out posts from when we read that book and they weren't quite as negative as I remembered. Some people, myself included, enjoyed
"Freehold," but it was kind of an ugly novel exploring the consequences of nuclear war, and the horror of cannibalism, and it featured lots of unlikable characters.

"Door Into Summer," by comparison seems bright and cheery. In theory, it is primarily about the engineering of robots that would help women around the house. It's also about time travel, cats, the future of civilization, and
betrayal.

(Side note: I told my wife about the novel, especially all the cat stuff, because we have a cat, and she commented that Heinlein captured the human/cat relationship so well that must have been a cat-person himself).

The novel is, in a way, timeless since it explored a future (1970) where robotic technology was exploding; a time that has not yet come to be. Then it explores a further future (2000) where man had begun to explore the solar system. While reading the novel it really bothered me that Heinlein picked the close years of 1970 and 200. Why didn't he choose 2300 or 2XXX. But upon reflection, I decided that the close year must have been a sort of optimism that civilization was
going to go through great changes quickly or maybe he didn't think anyone would still be reading his novels after the turn of the century.

What did you all think about the significance of the years?

Bill talked about the casualness of references to nuclear war bothering him. This didn't bother me; mostly because it was so in the background I hardly noticed it. Also, after reading Bill's post I thought that leaving it in the background just kind of fit. As I said before, the novel was written in a very intimate sort of narrative voice. It explored Davis' character and his life and interpersonal relationships. It explored the differences between 1970 and 2000, but only anecdotally. So, I felt it fit that there were questions sort of left unanswered about the "6 Weeks War."

Imagine someone in another reality writing a sci-fi novel about our reality. Would Sept. 11 be mentioned? Maybe, but only if it was important to the story, perhaps it would only be mentioned in passing. Certainly the nuclear war hinted to in this novel which caused Denver to become the US's capital had a bigger impact than 9/11, but I think the analogy works.

Now, I want to talk about the ending. Specifically, Davis pining for and marrying a girl he'd only known till she was 11. Doug talked about having met "old souls" in real life. I know the concept fairly well because I've always been kind of an "old soul" myself. I had older siblings growing up and I've always been pretty smart, so, growing up, I was often more comfortable with older kids or adults, more so than I was with kids my own age.

Anyway, Mary Beth thought the end of "Door Into Summer" was a sort of romantic fairy tale ending, but I found it to be downright creepy. I was fine with this plot-thread until the end. Remembering "Freehold" and the relationship between that story's protagonist and the much younger Barbara, I was worried where this story was headed when Ricky's character was first introduced. But for the bulk of the novel Davis' love for Ricky seemed to be platonic or fatherly. I thought, in the future Davis was searching for Ricky as a friend, a link to his past, not
a lover. Though maybe I failed to read between the lines since Davis gives up the moment he finds out she's married.

In my opinion, Davis falls in love with an idea. The idea of him finding Ricky and living happily-ever-after keeps him going when he is thrust into a future where he doesn't belong. But, how can you fall in love with an abstract idea? The Ricky who emerges from cold sleep is not an 11-year-old girl, but a 21-year-old woman Davis has never met.

I always feel like the man I am today bears little resemblance to the man I was 8 years ago when I was 18. Maybe I'm closer to that version of John than I think, but one thing is for sure, 10 years can be a long time.

Personally, I think the novel would have made more sense if Davis had met Ricky in 2000 and fallen in love with her. Given the time-loop quality of the novel, she would have been already married to Davis' future self, but she could have played coy and implied she was married to someone else. Thiscould have been the event that caused Davis to visit Denver and Dr. Twitchell. Or when Davis tracked Ricky down he could have met his future self. It would have spoiled the ending, but it would have been an interesting meeting. The same scenario I just
described happened in the Red Dwarf episode "Stasis Leak," one of the best of the series.

Either of these would have made the ending less "creepy" and more realistic, but maybe I'm just not a "romantic," as I wouldn't fall in love with a person I'd never met or talked to as an adult.

What do you think was Heinlein's thought process: Was he a romantic, was he making a statement about pedophilia or was it all incidental because he just wanted an interesting time-travel-twist ending?

Or I'll ask the same question in a different way: Why didn't Heinlein have Davis meet Ricky in 2000? Was it to maintain tension in the story or was it supposed to be romantic?
Posted by Chimeradave at 8:07 PM