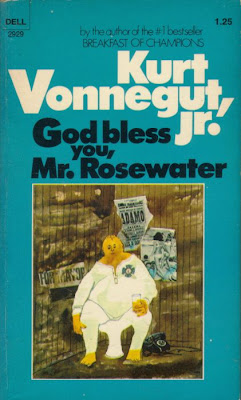 “God Bless You Mr. Rosewater” by Kurt Vonnegut Jr. (1965) is a novel about the relationship between the rich and the poor in modern society.

Eliot Rosewater controls a foundation, which is worth 87 billion dollars and makes $10,000 of profit a day. Eliot has poor personal habits, he constantly drinks, he wears the same dirty cloths all the time and he rarely showers and he is estranged from his wife. However, Eliot is a humanitarian who cares deeply about the poor. Over the years he has gotten to know and given vast sums of money to many of the poorest people in the small county of Rosewater, Indiana. This is where his family has their estate and legal residence (though the family hasn’t actually lived there in several generations). Eliot has a foundation telephone line that he basically mans in his office/apartment 24/7. He is always available if someone needs any sort of help. One woman, Diana Moon Glampers constantly calls him just to chat. Because Eliot gives so much of his money to the poor, he is seen by many of them as an almost religious figure. One woman insists that he baptize her children.

In stark contrast to Eliot is his father Lister Rosewater a career Senator. Senator Rosewater hates the poor. He believes they are worthless and lazy layabouts. He also thinks that his son Eliot must be insane because why else would someone want to help the poor?

For all the poor that love Eliot, it seems there are an equal number that side with the Senator because they feel it is wrong to accept handouts.

Vonnegut lets the reader decide who is right giving equal time to both sides and making each extreme seem ridiculous.

There is also a sort of tangential story about a Rosewater family in Rhode Island who are cousins to the other Rosewaters, but don’t know it. They are middle class, but are very unhappy because they desire to be wealthy.

Like all of Vonnegut’s novels it is wickedly funny and totally subversive. There is a 13-year-old girl in the novel, Lila Buntline, who makes money by buying all the dirty books (like “Tropic of Cancer”) in town and reselling them to other kids at a huge profit, all under the nose of a organization of mothers continually declaring the town free of smut.

Also like other Vonnegut novels “Rosewater” seems to be just a part of a much larger tapestry. A character visits the Rumfoord Mansion (Sirens of Titan). Eliot gives a speech at the Midland City Science fiction convention (Breakfast of Champions). And, Kilgore Trout’s science fiction stories appear occasionally throughout the novel and he makes a special guest appearance at the end of the novel.

I consider Vonnegut to be a science fiction author even though many of his novels including this one aren’t science fiction novels. But he is one of those authors that is hard to categorize. So, I thought it was kind of funny that “Rosewater” was shelved in the science fiction section of the little used-bookshop where I recently bought it. I don’t know how Vonnegut would feel about being labeled a science fiction writer, but there are worse things to be categorized as, right?

Additional: Here is proof that Vonnegut didn't appreciate being know as a science fiction writer. This column appeared in the New York Times in 1965 the same year "Rosewater" was published. I think Vonnegut ends up sounding like kind of a jerk, but that's because I'm a happy member of the "lodge." Thanks for the link Bill!
Posted by Chimeradave at 8:57 PM