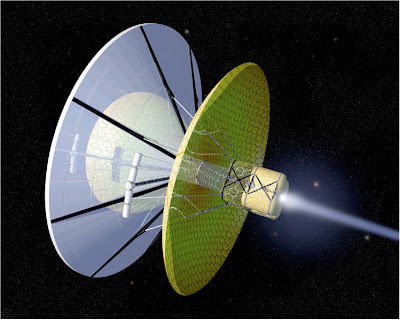 The story involves a ship traveling via a bussard ramjet engine. Physicist Robert W. Bussard proposed this method for space travel in 1960. The ship has a huge electro-magnetic-net that collects hydrogen from space and compresses it so hard that thermonuclear fusion occurs. This energy is forced out of the rocket’s exhaust and acts as the propellant. And because the hydrogen is everywhere in space they don’t have to carry the weight of fuel.

Unfortunately Bussard’s theory was later disproved because it turns out there isn’t as many high concentrations of hydrogen in space as was thought. However when Poul Anderson wrote the book in the late 60's we didn’t have that information, so I can’t fault him for that.

"Tau Zero" has kind of a weird prose structure. There’ll be a couple of pages of story and then a couple of pages of technical information about the ship or about the bussard ramjet engine. This can be kind of jarring because sometimes I’m more interested in what’s going to happen next in the story, so I’ll want to skip the technical stuff and other times the story dragged and the science was more interesting.

The book featured 25 men and 25 women on the ship Leonora Christine. I wish the book had a cast of characters list like the Niven/Pournelle novels always have. I made my own list because I wanted to see if all fifty were at least mentioned. I got about 20 men and only 7 women

In order of appearance or mention

(Seen once or twice and/or only mentioned)
6) Olga Sobieski; 7) Marie Toomajian

I thought this was kind of unbalanced. Why were so many more men mentioned? The numbers look a little less unbalanced when you consider that there is approximately the same number of men and women characters that are significantly explored. Boudreau and Pereira are seen doing their jobs on the ship but never really seen off-duty. But it was straight up sexism that so many less women are ever mentioned, Anderson couldn’t imagine what jobs a woman would be doing in space, so he said they were there, but never said what they were doing.
----

Reymont became too powerful a character compared to the captain who in theory should be the most capable. I understand the captain was supposed to be of an earlier time period because of time dilations, so he feels like he can’t relate to his crew, but at that point shouldn’t he just be a technical advisor instead of a captain. Movie sets sometimes hire experts from scientific fields in order to get details right, but no one puts them in charge of the whole film.

Towards the end of the book I started to wonder how much time had past for the ship and despite all the depression the crew went through in the book, it couldn’t have been more than a couple of years. I find it hard to believe they traveled through billions of years real time even with time dilation, but as I learned when I questioned some of the science in “Ringworld” sometimes you just can’t understand the math. As they increased speed, maybe the increase in time dilation increased exponentially and exponents get real big, real fast. Can anyone here explain to me mathematically whether this story could be true or not?

The character of Lindgren bothered me more and more as the book went on. At the start of the novel she is a young girl fresh out of school. She has trained for many years to be an astronaut and we are told she had an extensive education. She is given a very high position for a rookie: first officer. You see, in this novel the first officer’s main job is to be like a human relations officer. You see the captain is a veteran from a different time period so he needs someone to almost translate for him, tell him what modern people are like and smooth over awkward social situations.

In the first chapter Lindgren shows she is a good planner when she bags a boyfriend for the flight before the flight takes off. She sets up a meeting with Reymont before the mission and tells him she’s going to be very busy at the beginning of the mission, but it’s a long mission and she know she’ll want some sexual release and some human contact from time to time, so she wants to seal a deal pronto before someone else bags Reymont. I thought this was pretty smart and showed her to be a savvy judge of how shipboard politics would work.

However, from that good start she starts to get weird. When the engineer is having trouble performing his duties she goes to his quarters and has a drink with him, finds out it’s lady trouble that’s got him down. She compliments him, tells him he’s a great guy and then proceeds to have an affair with him. The affair ends up destroying her relationship with Reymont, who is by her own accord, the love of her life.

So why did she have the affair, for adventure? No. Reymont wasn’t fulfilling some kind of emotion need? No. She had the affair because the ship needed the engineer and the engineer needed sex and his confidence rebuilt. How do I know this for sure, because she does the same exact thing later in the book when Elof Nilsson is feeling suicidal and it is decided that the ship won’t survive without him at the top of his game.

Now it’s one thing to take your job seriously, but it’s quite another to take it upon yourself to become the ship’s courtesan. I’m all for a liberated women that uses her sexuality, but it’s a fine line between being a modern liberated woman and being the ship’s prostitute.
Posted by Chimeradave at 9:00 PM 1 comment: