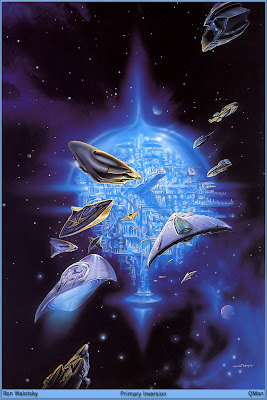 "Primary Inversion" by Catherine Asaro (1995) is the first of many novels in the Ruby Dynasty Saga (or Skolian Saga). Asaro has written 13 novels in the series to date.

This novel introduces the Skolian universe. Human beings long ago left Earth and started building empires that span many solar systems. There are three different empires that have emerged over many generations: The Skolians whose ruling class are psions (who have empathic and sometimes telepathic powers). The Eubian Concord is the Skolian’s polar opposite, their ruling class are called Aristos and they derive pleasure from making psions (who they call providers) suffer. They keep these providers as slaves and torture them. The third empire is the Allieds, which are the ancestors of original humans and have found themselves in the middle of the ongoing intergalactic war between the Skolians and the Eubian Concord.

The main character of the novel is Sauscony (Soz) Valdoria. She is an Admiral in the Skolian military and she is a member of the Skolian royal dynasty and possibly next in line to be Imperator.

Valdoria is not your typical princess; she is more of a tough-as-nails action-heroine type. At the start of the novel, she is on a neutral planet for a little bit of R and R before her and her fellow Jagernauts go back to fighting the war with the Eubian. Jagernauts just seem really bad-ass, they are all dressed in black, big boots, black leather. I picture them as a military version of the Beatles early look in Germany. A Jagernaut’s main side arm is called a Jumbler, it’s a hand-gun sized partial accelerator that can only be fired by its owner.

Because of their psionic powers, which most people don’t really understand, the Jagernauts have kind of a bad rap in the popular culture of this universe. A lot of people believe what they see in the holomovies that most Jagernauts are really close to going crazy and going on a violent killing spree.

I didn’t understand how with a rank of Admiral, Valdoria is only in charge of 3 other people. I know the book explains that the human mind can’t take input from more than 3 other minds so 4 is the maximum squad size. And I understand that the Skolian advantage is their speed because of the Kyle web so the squads have to be autonomous. But the fact remains that she is an Admiral that means she has a lot of experience and training. You can’t ever win wars by sending your best officers to the front lines to die. Valdoria should have been directing troops from the safety of a battle ship or she should have been in contact with other troops using conventional communication. Basically it seems like her skills are wasted by being in such a small unit.

Here is an explanation about psions and their Jag ships, “Warfare had evolved terrifyingly beyond the abilities of humans to fight it. Although drones with EI pilots couldn’t match the human mind when it came to innovation, no human could survive against the light speed processing abilities of a drone or its ability to endure immense accelerations. Except a Jagernaut. The enhanced link between our brains and our ships boosted our minds into the ship’s EI. Add to that the advances in the stasis technology that protects humans from g-forces and the end result was a weapon with the speed and endurance of a drone and the creativity of the human mind.” (p 83 of the Baen E-book)

I liked how the Jags had the advantage of speed over the Eubian but they also had disadvantages such as feeling the pain of the people they were killing because of their empathy and also being more susceptible to the endless taunting the Aristos spewed at them.

Overall I thought the main space battle in the novel, was exciting, but I never really understood what was happening; I just had to kind of go with it. I still not sure I know what was going on in the battle or how inversion is supposed to work.

The Aristos are definitely something that you’ve got to just accept/suspend your disbelief about in order to enjoy the novel. I know that some people disliked the novel because the idea of reading about torturers who get off on their torture is an absolute no-go for them and I can completely understand that because obviously it wasn’t pleasant for me to read about that kind of subject matter either. But the more difficult hump for me was to accept that these two cultures that are such polar opposites really both existed. I mean for the whole novel I just kept thinking these two cultures would always be at war. It was just too convenient. It would be like if aliens landed tomorrow and it turned out that humans were a “superfood”
Posted by Chimeradave at 9:42 PM