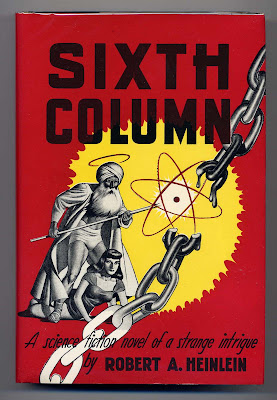 The “Sixth Column” is one of Robert Heinlein’s first published novels. It was written in 1941 and supposed that the Asians got the atomic bomb and the “vortex beam” and won the war. I think Japan had taken over India and China before invading America so they are referred to PanAsians in the book. We see very little of them in the novel, so they never become anything more than a caricature of Japanese culture. All we learn about them is that they speak in a formal and flowery language and at the slightest dishonor, they commit suicide rather than disgrace their families. They are cruel rulers; thousands of Americans are put to death in retaliation for some rebels capturing one of the PanAsian governors.

People have said that this caricature is racist and it is! However, it is no worse then when aliens are presented as one-dimensionally evil invaders in any number of science fiction novels. But all of us know Japanese culture and Japanese people so we know what a one-sided portrayal this is. Where as when it’s invaders from Mars we just think, “Oh, those Martians are just so evil.”

And it is no different than what governments did historically to demonize the enemy in times of war. The US government demonized the Germans during WWI by portraying them as dark, evil Huns and also demonized the German people and the Japanese during WWII. That’s just what all countries did. It’s only modern technology that has made this kind of thing more difficult today. I mean the average American wants all the terrorists dead today, but at least they don’t want the Afghan people dead. That’s progress!

This book only acknowledges two races Asians and Caucasians; I don’t know what happened to all the other races. African Americans, Native Americans, Middle Eastern Americans just aren’t mentioned at all. As I’ll go in to more detail later the American forces come up with super weapons that can be programmed to only affect PanAsians.

Another unspeakably horrible happening in “Sixth Column” is the PanAsians committing genocide on all the Asian Americans. You see, the PanAsians want to be the master race and want all Americans to be a slave race. It was just too complicated to them that Asian Americans would look like the masters but still be slaves so they just started getting rid of them. It’s not the same, but Americans did round up Japanese Americas during WWII and put them into civilian internment camps (a nice way to say prison camps) because, “they couldn’t be trusted.” A lot better than mass murder, but still awful.

The first chapter of the novel is really excellent, it is really rich story and idea wise: The PanAsians invade Washington and New York City and other major cities and completely take over America in one day. Deep within one of the Rocky Mountains, there is a secret American military base devoted to scientific research called “The Citadel.” On the same day as the invasion, the bases’ most brilliant scientist Ledbetter had an unexpected major scientific breakthrough. Unfortunately the breakthrough resulted in not only his own death, but also the death of all but 6 members of the Citadel.

Also that same day, Major Whitey Ardmore, an intelligence officer from Washington arrives at the Citadel to see how operations there are progressing. He was sent before the invasion. When he left Washington, their hope was that some weapons would be developed soon, before the PanAsians decided to attack. Unfortunately, minutes after his arrival at the Citadel they listen to radio reports of the destruction of American cities. Ardmore has no choice, but to assume that the Citadel might be the last hope for America defeating the PanAsains and that they are on their own.

Ardmore first has the 6 men introduce themselves, there are 3 scientists, a mathematician, a biologist/bio-chemist, and a radiologist/physicist, a craftsman, a cook, and a cook’s assistant.

The first job in the Citadel after Ardmore gives the group a pep talk is to clean up the hundreds of dead bodies in the base from the experiment gone wrong.

Ardmore who immediately assumes command of this group is himself not a military man, he was an advertising man and became a sort of PR man in Washington. It is interesting to see a man that has never fought a war learning how to lead and how to win against impossible odds.

The breakthrough that Ledbetter had concerned the discovery of additional spectra; I’ll let Dr. Lowell Calhoun explain it, “You see, most of the progress in physics in the last century and a half has been in dealing with the electromagnetic spectrum of light, radio, X-Ray…General field theory predicts the possibility of at least three more entire spectra. You see, there are three types of energy fields known to exist in space: electric, magnetic, and gravitic or gravitational. Light, X-rays, all such radiations, are part of the electromagnetic spectrum. Theory indicates the possibility of analogous spectra between magnetic and gravitic, between electric and gravitic, and, finally , a three-phase type between electric-magnetic-gravitic fields. Each type would constitute a complete new spectrum, a total of three new fields of learning. If there are such, they would presumably have properties quite as remarkable as the electromagnetic spectrum and quite different.” (p.20-21 in Hardcover Edition)

Ledbetter it seems had found a way to tap into these other spectrums, unfortunately for him and most of the other people in the Citadel the wave he tapped into is one that is deadly to humans. Calhoun and the others figure out a way to adapt the beam. They can make anyone the beam hits unconscious or dead. They even figured out a way to make it only do so for PanAsians and not Caucasians.

Yes, it is extremely unbelievable that 7 people managed to come up with so many technological advances so quickly, but it makes sense that if you tapped into what is basically a new science you might make a bunch of different advances fairly quickly.

So now Ardmore has some superior technology, but it is still just seven men against an empire and he has already seen that as active guerilla warfare on his part would be paid for a thousand times over by innocent Americans. So he has to resort to the strange tactic of starting a new religion. You see the PanAsians still allow freedom of religion oddly enough, because they say “all a slave needs is food, rest and religion and if you give them religion you can deny them the other two sometimes.”

The Citadel quickly spreads their religion around the country and by the time the PanAsians catch on, the Americans are ready to strike.

I enjoyed the book despite its flaws, but I can see why people are offended by the one- dimensional demonizing of Asians and/or think the scientific advances are too convenient.
Posted by Chimeradave at 5:48 PM