Thoughts on "the Time Machine" 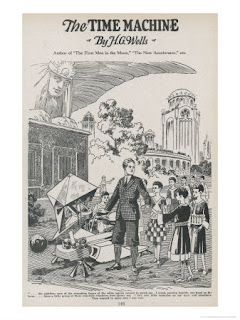 The first notes I have are about the audio book specifically. It's the 1999 Blackstone Audiobooks version. The cover features some kind of black circular warship flying in the air and fighting a red machine that has some sort of clusters of spheres as armor. Does anyone know where this image came from, it has nothing to do with the contents of "The Time Machine," all I can think of is "War of the Worlds" but there are no black flying battleships in that book either.

The other thing about the audiobook itself is the narrator sounds like a weenie. Bernard Mayes is the gentleman's name and I'm sure he's a nice guy, but he sounds like a feeble old man. His voice cracks, creaks and brings to mind an ancient science teacher one year from retirement. I found it distracting, but perhaps Blackstone thought it was a good fit, though I don't picture the Time
Traveller (When did we take an L out of the word?) in my mind's eye as more than middle-aged.

Many of the ideas expressed in the novel got my brain working overtime.

1) The novel opens with a gathering of men circa 1895. The narrator whose profession is not identified makes a big deal over everyone else's; one man is a psychologist one is a medical man another is in politics. Then the true protagonist of the novel comes in and demonstrates a working model of a time machine. The narrator calls the protagonist "The Time Traveller." I suppose he is some kind of scientist, though it seems more like he is some kind of Tinkerer. Anyway my main question with this whole scene is: Why it was so important to the Traveller to prove himself to these men of society? And, who is this chorus of professionals supposed to represent, the reader? Skeptics? Is it all just a convenient way to get out some exposition about the theories of time travel?

2) Listening to the book got me thinking about science fiction in a very broad scale. It seems to me that most science fiction whether it is generally Space cowboy or Dystopian. This is not a hard fast rule but it seems to me that most Science Fiction writers agree with Stephen Hawkings, the human race is either going to spread to other planets or it is going to eventually collapse due to a natural disaster or our own technology (nuclear war). Some authors overlap the
genres such as Asimov's Foundation series, which shows that even a vast empire of thousands of planets is just as vulnerable to the ebb and flow of civilization as one planet is.

In my mind Dystopian novels like "1984," "Brave New World," "Gather Darkness," were almost not true science fiction, because I thought rather then exploring theoretical advances in science and technology they explored theoretical "advances" or declines in governmental systems and economic ideologies.

However, reading "the Time Machine," though I was familiar with the story (and had read abridged versions growing up), made me realize how linked all these genres really are. The only true difference between Space Cowboy or Dystopian novels is how long humans will enjoy dominance over Earth or the universe and how long will we continue to advance our civilization, before we fall into a harsh decline.

3) The Time Machine, I thought was somewhat unique in the sense that it supposed that in the year 802,701, human civilization had long ago fell into decline, but according to the evidence presented never got off the planet.

802,701 seems like farther into the future then most science fiction. That probably not true though. Can anyone figure out when Dune or The Foundation Series take place in relation to today?

An episode of Doctor Who ("Utopia") took place in the year 100 trillion, the theoretical end of the universe. As does Douglas Adams' "Restaurant at the End of the Universe."


4) One of the things that bothered me about this novel was that the Time Traveller never sees anything futuristic in 802,701. Nothing on the Eden like landscape of future England or in the huge dwellings of the Eloi, under the surface of the earth or most noticeably in the museum; except one brief mentioning of machines the Time Traveller didn't immediately understand.

My own guesses for this lack are that A) Wells thought that the one huge suspension of disbelief that someone could travel though time would be all the readers of the time could except or B) Wells didn't want the book to seem dated if he predicted technology that didn't come to pass the way he imagined. C) That wasn't what the book was about.

I found it disappointing because I was so impressed to find that in Jules Verne's long unpublished novel Paris in the Twentieth Century, (which I haven't read but want to) Vernes predicts such technology as air conditioning machines, skyscrapers, gasoline-powered automobiles, high-speed trains, calculators, The Internet (a worldwide "telegraphic" communications network), electric chairs (criminals "executed by electric charge"), televisions, elevators, and fax machines. I want to read the book in order to find out what technologies he incorrectly predicted.

I can't help but wonder what Wells the other great Victorian science fiction author, would have predicted for our near future.

5) The end of the book really lost me. After the great adventure in 802,701 I thought the Time Traveller would return to his present day, but no he makes a brief journey to an even more futuristic earth where the Sun is now Red. Now Wells gets points for being right that a Red Giant is the next step for Sol, but Earth will be swallowed when that happens and long before that happens all water on the planet will boil due to increased temperatures and the Earth's atmosphere will disappear. Also even if Earth was somehow spared there is no way Mercury, which the Time Traveller states causes an eclipse would be spared from the Sun's expansion. How come we didn't know all that back in 1895?

Also, more in general, I didn't understand what the point of this sequence was? It was really brief and didn't seem to add anything interesting. I read on Wikipedia that in the original draft the Time Traveller finds some sort of "rabbit-like hopping herbivores" in this future and only after stunning or killing it realizes that it might be humans after further thousands of years of
decline. Without this deleted part, I would have just cut the whole sequence.

It reminded me of reading "Gulliver's Travels" unabridged for the first time and being stunned that Gulliver went to lots of other islands in addition to the three well known ones. But in "Gulliver's," while those adventures are shorter they are all significant because each one expressed a different idea about government and human nature.

6) The last thought I had was: if as the book supposes, time travel technology was possible using Victorian era science, then why doesn't the Time Traveller run into other time travelers from the 20 or 21st century? Maybe he was saving that for the sequel.
Posted by Chimeradave at 2:14 PM