Thoughts on "The Foresight War" 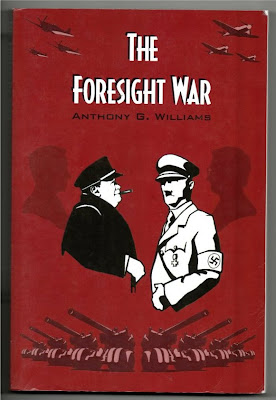 In this review of “The Foresight War” by Anthony Williams, I will refer to the author as Tony, because the two of us are both active members of the Classic Science Fiction Message Board. Where we discuss all kinds of things science fiction related.

The plot of the novel concerns two present day (2004) WWII historians traveling back to 1934. One historian is British (Don Erlang), and the other is German (Konrad Herrman). Each of the historians informs their respective governments as to what will happen during the war. Both countries use the knowledge from the historians to better prepare for the war so that weapons that in our history were available in the middle or end of the war are mass produced by the start of the war.

Erlang briefly talks about his mother and father being just children in the 1930, but he never goes and seeks them out. I would have found it irresistible, I mean, his parents might have just been children, but what about his grandparents? I’d love to meet my grandfather when he was in his prime; he died before I was born. He was a doctor and had a private practice in a suburban town for many years. If I’d gone back in time, I’d probably go see him as a patient. That kind of harmless encounter probably wouldn’t put the space-time continuum at risk.

Erlang speculates as to the nature of time travel. He cites a time paradox that is worth mentioning. Since he has altered the course of the war there is a chance that one of his parents might get killed by a bomb during the Blitz that in the normal course of things didn’t explode anywhere near them. If they died then Erlang would have never existed, therefore Erland couldn’t travel back in time and alter events therefore history would return to the way it was in the first place. Unless, as is speculated, Erlang’s time traveling created a parallel universe or dimension which is no longer looped to the previous future, but instead free to explore an entirely different future.

My theory is that the “Foresight” universe is tangent dimension created by an all-powerful being (the author) just to have a playground to test his what ifs. (The novel's Afterword pretty much proves my theory).

Herrman, the German historian who is sent back through time, was written as less capable then Erlang. He just didn’t seem to be a historian on the same level as Erlang. I couldn’t help but wonder how much more prepared for the war Germany would have been if Herrman had truly been Erlang’s equal. Also, I never really understood why Herrman worked with Hitler and Himmler and the rest when he clearly found them repulsive. His motivation was to create a stronger Germany that wouldn’t end up controlled by Russia for decades. From the beginning, I would have looked for a ways to circumvent and destroy Hitler and the Nazi’s, not work with them.

This means that the book is readable to a Joe Shmoo like me, who is not one of these dumb Americans you read about that doesn’t know who fought in WWII. But, I am also not an expert on the war. Heck, for most of the book I kept wondering when they were going to start building trenches.

The action of the war is played out in vignettes that run anywhere from one paragraph to a page and a half. Most times the vignettes are strung together so they tell the story of a battle or a certain campaign. You see the action from different perspectives such as, British planes, then German U-boat, then a British tank, etc. Sometimes it was difficult for me to figure out what I was reading about, and by the time I understood the perspective changed again.

The perspective also shifts back to Erlang or Hermann who are in respective command centers and are reacting to the events of the day like a sort of Greek Chorus evaluating the course of the war and providing exposition.

Sometimes the vignettes were emotionally powerful such as the story of the British plane that fires at a German bus. Shrapnel from the bus ends up downing the plane. The pilot bails out and hits the ground near the bus. It is then that he realizes that the bus he destroyed was full of children. A crowd of Germans grabs the pilot and lynches him. As they tie the rope around his neck he pleads, “I didn’t know it was children.” This level of pathos is impossible to sustain, especially with so many short pieces.

One part of the book that worked really well was the part that dealt with Pearl Harbor. Morgan, an RAF (Royal Air Force) officer, is one of the few that know about future events. He is given the horrible task of going to Pearl Harbor to minimized US loses without telling them there is going to be an attack ahead of time. This piece wasn’t really longer then some of the other perspectives, but it meant more to me because I’d gotten to know Morgan throughout the novel.
That would have been my preference to follow certain soldiers’ perspectives for longer periods. I know the whole point of the book was to explore questions like how this British tank would have faired against that German tank, but without having the humanity of a soldier you get to know and care about, it just may as well be robot tanks fighting other robot tanks.

I felt like it was weird that the Holocaust was only mentioned once or twice by Erlang and nothing about it was ever seen first hand. However, I realize concentrating on this horrible genocide wouldn’t have added anything to the focus of the novel, which was exploring how the “Foresight” universe differed from our own.

The end of the book reminded me of two recent movies, both of which came out after this book. Is Hollywood stealing ideas from you Tony?

The movie “Valkyrie”(2008) is all about the ill-fated German resistance movement. Operation Valkyrie is not mentioned by name in “Foresight,” but it is pretty clear that after Herrman blew up all of the Nazi leaders, the resistance used the Reserve Army to seize and remove the Nazi Party under the false pretense that the SS had attempted a coup d'état.

The second movie that came to mind was “Inglourious Basterds” (2009). At the end of the movie several plots to assassinate Hitler and the other leaders of the Nazi Party collide with explosive results. The traitorous SS Colonel Hans Landa describes the film premiere in Paris that is being attended by Hitler, Himmler, Göring, Goebbels and other prominent part members as having “all the rotten eggs in one basket.”

I think the book ended in the right spot, at the end of the German/British conflict, because that’s what the book was generally about. However, I did have a lot of questions about what may have happened next:

-Did the increased Japanese navel losses at the beginning of the war cause the use of atomic weapons to be unnecessary?
-Was the United Nations created?
-Was the State of Israel declared?
-When did Britain “get the Bomb”?
-Did Russia emerge from the war a super power?
-What happened to Mussolini?