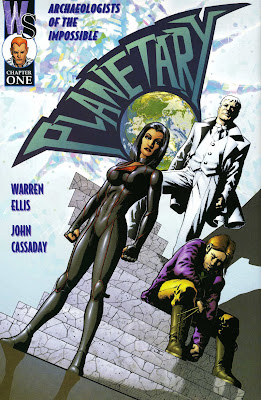 Planetary is a near perfect synergy of art and story. That’s really the secret to a good comic, I think too many of the comics of today attempt to treat a comic as if it were a movie rather than treating a comic as a unique art form.

All 26 issues of Planetary were written by Warren Ellis and drawn by John Cassaday. Planetary is about a group of historian adventurers who attempt to uncover the secrets of the past. Think Indiana Jones, but with super powers. The universe of the story is a pastiche in which every pulp novel character and every superhero character appear to have inhabited this same universe in one form or another. For example in this universe there was a 30’s era superhero team made up of Doc Savage, the Shadow, Tarzan and other pulp-era heroes. At one point, the Planetary team scientifically examines a mysterious hammer that bears more than a passing resemblance to Thor’s hammer Mjolnir. Another issue focuses on versions of Superman, the Green Lantern and Wonder Woman.

Because of this aspect of examination, Planetary is a sort of thesis paper on the history of comics. In a way the heroes even acknowledge that they are in a comicbook. It is mentioned more than once that scientists in their universe have discovered that they are three-dimensional objects in a two dimensional world.

Many issues pay homage to a specific genre, there’s the fifties monster movie issue (one issue for American and one for Japanese) and, another issue is a tribute to “Rendevous with Rama” by Arthur C. Clarke.

If Planetary has perpetrated any crimes it’s that in some issues Ellis steps back and just lets Cassaday go for broke on the visuals. The first that comes to mind is the issue in which Elijah Snow (the main character of the series, an old man who has lost his memories) views the world on a molecular level. However, one can definitely argue that Cassaday’s art is worth showcasing.

Planetary is a great example of terse story telling. It’s 26 issues (plus 3 special crossovers that I unfortunately haven’t read yet). And that’s it. It reminds me of those handful of great TV series that were one and done like The Prisoner in the 60’s; Fawlty Towers in the 70’s (okay that had 2 British seasons but only 12 episodes total) and in recent times Firefly, or Strange Luck.

As far as ongoing storylines, the world of comicbooks is even worse than television. Superman and Batman have been fighting crime for 70 years. Spider-man and the rest of the Marvel universe have been at it for over 40 years. We love all of those characters because their adventures have thrilled us for many years, but how many of their adventures are fresh or completely original? Probably only a handful.

Unfortunately the price you pay for having a terse story is that there are unanswered questions or the story never goes the way you wanted it to. An example of this is, there was an important event in Snow’s life that took place on a submarine called the Nautilus. William Palmer, (a super villain and member of main baddies the Four, super villain versions of the Fantastic Four) destroyed the ship and a woman whom Snow loved was killed, but we never learn more than that. [My own theory is that it hints to Captain Nemo and The League of Extraordinary Gentleman. Snow had previously met Sherlock Holmes and Dracula]. 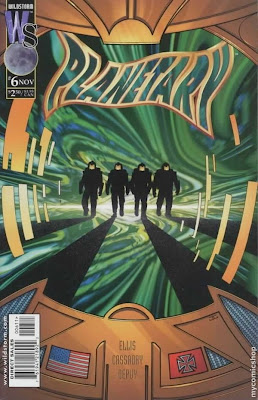 One thing that’s great about Planetary is that its fight scenes are more realistic then in most comics. Ellis understands that most fights are more like a knife fight then a boxing match so his battles are quick and dirty. Also, the characters use their super powers very sparingly, but when they do use them they are accurately portrayed. One of the things that drives me nuts is that in comics when the Hulk hits a brick wall it crumbles, but when the Hulk hits a villain in the face it just knocks him out. The truth is the Hulk would probably literally punch his brains out. So it made me smile when at one point in Planetary the super-strong Jakita Wagner punches a villain and his head and spinal cord goes flying.

In the end, even though I appreciated the concise story telling, I wanted to read more Planetary adventures. The villains aren’t supposed to stay beaten the first time. They always come back for more, right?
Posted by Chimeradave at 9:36 PM